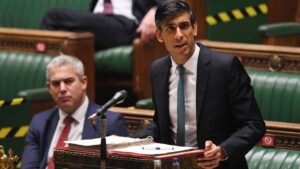 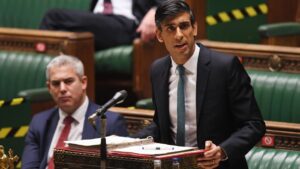 Rishi Sunak is set to unveil a carbon tax next year as he attempts to repair the battered public finances.

The chancellor will announce tax rises next year to help bring the national debt under control after it ballooned above 100 per cent of GDP for the first time since the early 1960s, according to the vast majority of 73 experts contributing to an annual poll.

Tax increases, possibly towards the end of next year, are expected as growth recovers strongly, mass unemployment fails to materialise, inflation hovers at about 2 per cent, the Bank of England continues printing money and negative interest rates are avoided, the survey suggests. Of 73 respondents to a question on taxes, 57 predicted that an increase would be announced if not implemented next year, with green levies considered most likely. The next most likely options were wealth taxes and a solidarity pandemic levy, in the form of a temporary tax surcharge or excess profit tax.

The chancellor will have to find £40 billion a year by the middle of the decade to stop the debt spiralling, the Institute for Fiscal Studies has warned.

Mr Sunak has hinted at tax rises, saying shortly before Christmas: “lt’s right we take the necessary steps to put the public finances on a more sustainable footing so we are able to respond to future crises.”

With a manifesto commitment not to raise income tax rates, national insurance or VAT, he will need to look elsewhere. Forty-two respondents to the survey expect environmental taxes, 39 predict taxes on wealth and pensions and 24 forecast some form of “solidarity pandemic tax”.

With the UK hosting the COP26 global conference on climate change next year, green taxes were an obvious theme. “Green recovery is likely a focus of fiscal activities . . . and may be embedded into a broader industrial strategy,” Thiemo Fetzer, an economics professor at Warwick University, said.

The government has already laid out plans for a “green industrial revolution” with £12 billion for schemes involving offshore wind, hydrogen fuel, carbon capture and other environmental projects. It must also replace the European Union’s carbon trading scheme now that the Brexit transition period is over.

Arun Advani, an economist at Warwick, said: “Leaving the EU provides a ‘Brexit dividend’ that carbon can be taxed uniformly throughout the economy now, providing climate benefits and much-needed revenue.”

Businesses have so far been resistant to plans for higher green taxes, though the International Monetary Fund has said that the carbon price needs to be about $75 a tonne by 2030. In the UK, it is about $25 a tonne at present.

As well as environmental taxes, respondents identified wealth taxes, with one expert describing them as “a soft political and economic target”.

The vast majority of economists — 86 per cent — said that the economy would not have recovered all the lost GDP by the end of next year but would still rebound strongly. More than half said that output would grow by 5 per cent or more next year. Unemployment is expected to hit between 6 and 7 per cent, its highest level since the aftermath of the financial crisis in 2008 but far below earlier forecasts of 12 per cent.

The majority expect the Bank to launch at least another £100 billion of quantitative easing but only four respondents expected interest rates to be cut from 0.1 per cent to below zero. Eleven expect rates to be cut to zero.